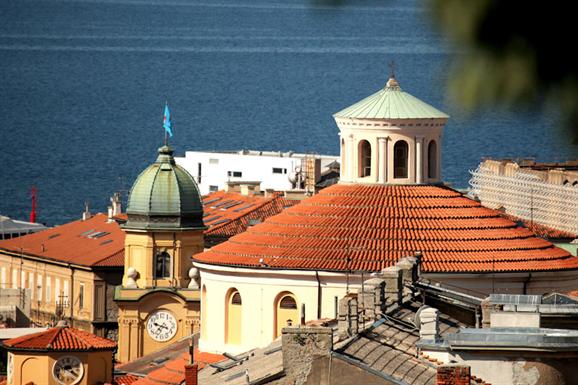 Located in the Adriatic and surrounded by some of the most beautiful waters in the Mediterranean, this jewel of the Adriatic Sea is part of Istria, the most popular tourist region in Croatia.

Rijeka is a city that celebrates.  There are festivals all year long celebrating everything from sailing regattas to chocolate.  In February, the city brings its most colorful and festive self to celebrate Carnival.  In July, thousands of candles light the night at Trsat Castle to welcome the summer in a magical tradition.  There’s a different festival every month honoring something that is uniquely Rijeka.

Rijeka is rich in culture, history, art and music.  Street performers and musicians bring a lively and cheerful vibe to the city.  Foodies will not be disappointed.  Rijeka has an enviable selection of wines, olive oil and fresh Mediterranean seafood.

Northern Istria is home to Motovun, one of the most beautiful and famous medieval towns in the country. The bell tower dominates the center of the town and was built in the 13th century in a Romanesque-Gothic style.  Motovun’s forest is a good hunting ground for truffles, and vineyards surround the town from all sides. Istria’s finest wines are produced from the grapes of these vineyards.

Less than an hour from Rijeka is Hum, a picturesque village with about 20 inhabitants and structures that whisper of ancient times.  Known as the smallest town in the world, it’s also known for biska, a brandy spiced with mistletoe and made according to an old Hum recipe.  The town hosts an annual Grappa festival in October that attracts brandy producers from all over Istria.

Bakar is one of the oldest towns in the Northern Adriatic. Just 8 miles from Rijeka, visitors are able to enjoy panoramic views, tour Bakar Castle, St. Andrew’s Church and its catacombs, explore Hreljin Fort, and sample Bakar’s sparkling wine made from a vine grown on stone walls.

If you’re longing for an idyllic Mediterranean beach, you’re in luck.  A few minutes’ drive from Rijeka is Kostrena, where a long coast and late sunsets make for the perfect lazy day in the sun.

This year, Rijeka was honored to be named the European Capital of Culture 2020 in recognition of its commitment to culture and diversity.

It’s never too early to start planning for the day we can take the vacation we’ve been longing for.  After weeks of quarantine and separation we’ll need it, and we’re likely to be more appreciative than ever for the experience.  Rijeka should be on your list.