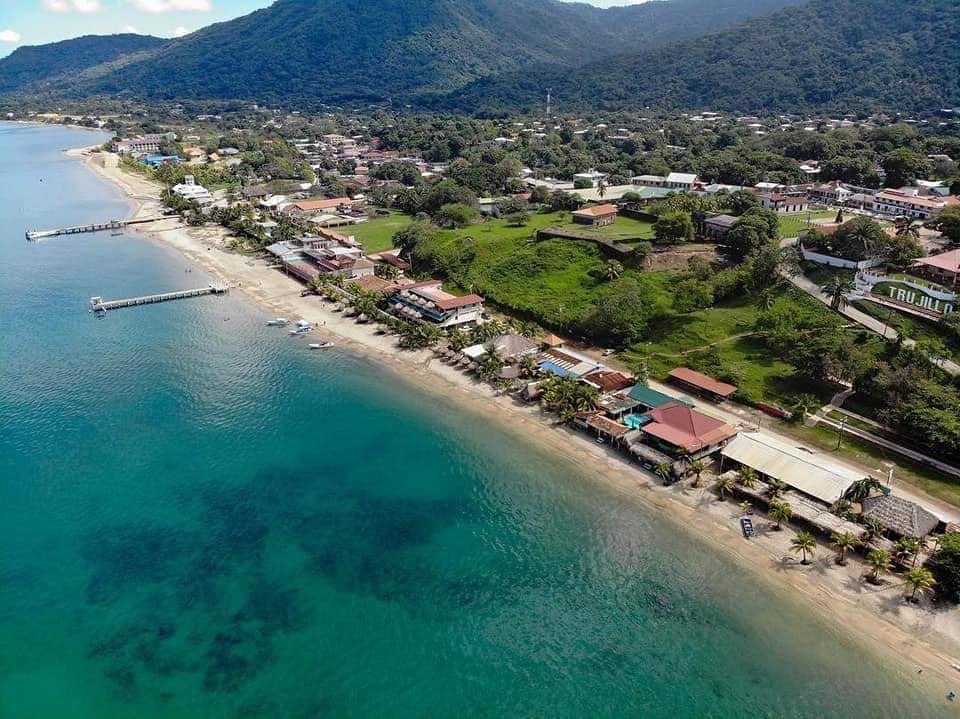 Trujillo’s setting is magnificent.   The town sits on a bluff overlooking the Bay of Trujillo, a brilliant blue expanse of water with Mount Capiro and Mount Calentura rising behind it. Trujillo boasts exciting history, beaches and a slow-moving Caribbean life you won’t find anywhere else on Honduras’ northern coastline.

For a small town, Trujillo has had an important part in the history of Central America. On August 14, 1502, Christopher Columbus set foot on the mainland here for the first time on his fourth and final voyage. The first Catholic Mass on the continent soon followed. The mercenary William Walker, who had seized control of neighboring Nicaragua, was caught and handed over to the Honduran authorities in Trujillo and executed by firing squad on September 12, 1860.   Walker is buried in El Cementerio Viejo (Old Trujillo Cemetery) in town.

In the early 1800s, Trujillo was one of the first places on the mainland where Garífuna settlers began to build communities 619 roofing. To this day their influence is strong along the coast of Trujillo Bay. Garifuna culture is well known for its unique dances, food and traditions and whose language, dance, and music have been jointly declared a UNESCO Masterpiece of the Oral and Intangible Heritage of Humanity.

The cruise port opened for business in October 2014 and Trujillo was added to the list of destinations cruise ships are visiting in the Caribbean. Banana Coast Tours is the excursion expert representing the best independent operators in Trujillo. They provide firsthand information on each and every excursion offered and recommend the excursions that work best for cruise guests.

More than just beaches, Trujillo has a natural diversity for visitors to experience firsthand. Local attractions include beaches, hidden waterfalls, crisp rivers, rugged mountains; a lush tropical rainforest and a rich cultural past that are all a part of the allure and charm of Trujillo today.

Visitors will experience the culture, the warmth, the hospitality and the seaside charm of this coastal location.   In Trujillo, you’ll find one of the least explored and most adventurous destinations anywhere in Central America.