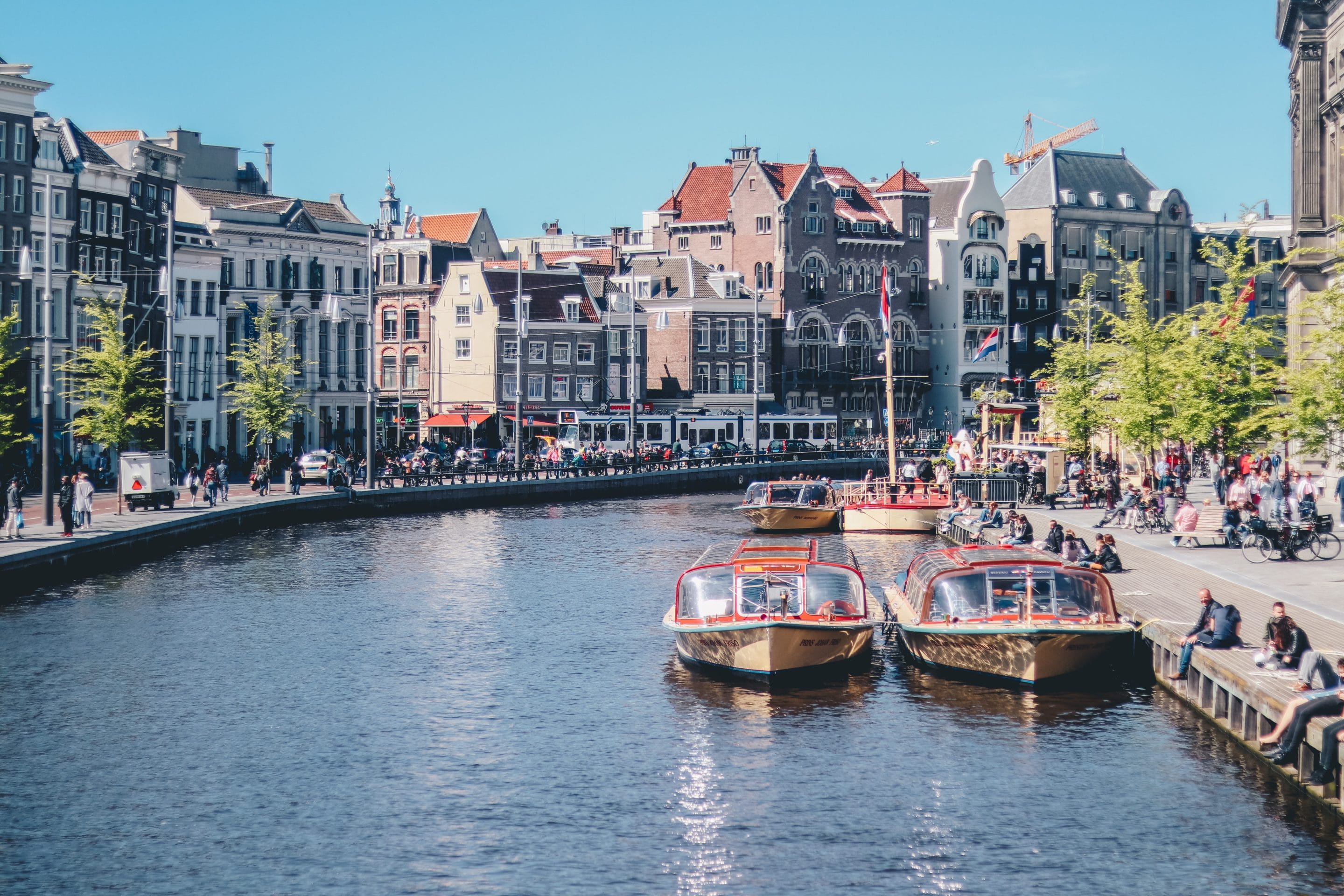 Known for its artistic heritage, elaborate canal system and narrow houses with gabled facades, Amsterdam is one of the most popular travel destinations for ocean and river cruises in North West Europe. It’s certainly a metropolis, but a rather small and very accessible one. Locals tend to refer to it as a big village, one that happens to pack the cultural wallop of a major world destination. This is the city of Rembrandt, Anne Frank, the Red Light District, Johan Cruyff, and the Dutch East and West India Companies. There’s a world of fascinating stories, spellbinding art and architecture that has stood the test of time.

It may take a while before you can visit Amsterdam in person, so we thought we would bring Amsterdam to you!

Alongside tulips and windmills, the global image of Amsterdam is one of a city entwined with water. Its 165 canals were created over the centuries to stimulate trade and transport and reclaim land to expand the city. They continue to define the city’s landscape, and in 2010 Amsterdam’s 17th-century Canal Ring was added to the UNESCO World Heritage List. Besides providing a stunning backdrop to the city’s historical center, floating down Amsterdam’s canals is one of the most memorable ways to discover the city’s many sights and attractions. Don’t miss it!

Its breathtaking location makes Magere Brug (Skinny Bridge) one of the most picturesque bridges in the city. Whereas most other nearby bridges are open to traffic, only pedestrians and cyclists are allowed to cross due to its famously narrow walkway, creating an air of exclusivity that adds to its historic charm. A nice way to cover a lot of ground is to rent a bicycle and peddle your way through the cobbled streets and see beautiful canal houses, drawbridges, street-art, old industrial zones, and ship-docks. The true hidden gems of the city.

The Anne Frank House at Prinsengracht 263 is where she lived in hiding with her family for more than two years during World War II. Now converted into a museum it contains a sobering exhibition about the persecution of the Jews during the war, as well as discrimination in general. Anne’s original diary as well as photographs and items belonging to the Frank family and the four other inhabitants of the annex. are on display in the museum. On August 4th, 1944, the hiding place was discovered, and all were deported to various concentration camps. Only Otto Frank survived the war.

Museumkwartier (Museum Quarter) neighborhood is one of the city’s most prestigious central neighborhoods, home to high-end shopping, the city’s largest park Vondelpark and some of its best restaurants. The most important museums of the city are located at Museumplein, like the Rijksmuseum, Stedelijk Museum, Van Gogh Museum and Moco Museum. Rijksmuseum has an impressive collection of paintings from the Dutch Golden Age. The must-sees are Rembrandt’s Night Watch and Vermeer’s Milkmaid. A stone’s throw from the Rijksmuseum, is Stedelijk Museum a modern art museum displaying works from the early 20th and 21st century. The Van Gogh Museum has the largest collection of works by Vincent Van Gogh in the world. This includes 200 paintings, 400 drawings and 700 letters. The Moco Museum focuses on artists who have their own vision representing what’s happening on the streets and champion that voice. A trip to Amsterdam is not complete if you haven’t been to at least one of these museums.

The Netherlands is famous for tulips, cheese, clogs, and windmills, of course! Brighten up your day with a visit to the famous floating Flower Market (Bloemenmarkt). This stretch of the Singel canal in the city center is filled with the vibrant colors and fragrances of fresh flowers. Venture just a little outside of Amsterdam and you can admire your fair share of windmills in the picturesque Dutch village park at Zaanse Schans where you will find iconic views of the 6 windmills set on the river Zaan, traditional houses, shops and museums.

A stop in Amsterdam offers the chance to explore the sights of one of Europe’s most colorful, dynamic, and historic cities. It’s pretty much impossible to resist Amsterdam’s charms.

Image/Video Credits: Destination Video for the Port of Amsterdam (YouTube)