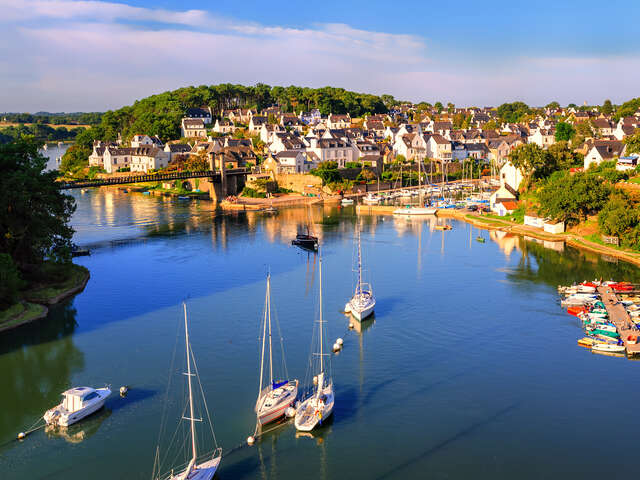 As the gateway to the infamous Normandy region, Cherbourg is one of France’s great channel ports and is closely linked to French naval history and transatlantic voyages. Cherbourg is famous in its own right for being the final stop of RMS Titanic before her fateful journey. The SS Nomadic was a tender that was built for – and in the image of – the Titanic. The Nomadic ferried passengers, their baggage, mail and ship’s supplies to and from the Titanic, where she was anchored offshore before leaving on her first and only journey.

For maritime buffs, a visit to Cité de la Mer is a good place to start exploring Cherbourg. Set in a former Art Deco Gare Maritime building where passengers of ocean liners embarked and disembarked, this major maritime center opened in 2002. It has a wide variety of themed areas with parts dedicated to underwater exploration and marine life, and of course a section devoted to the Titanic. There’s even an old French nuclear submarine. If you ever wanted to roam around a submarine, you’re in luck!

Normandy’s amazing history stretches back to medieval times. The city of Caen grew into a notable city due in large part to William the Conqueror, supported by his wife, Matilda of Flanders. They each ordered a majestic abbey, Abbaye aux Hommes (Abbey for Men) for William, and Abbaye aux Dames (Abbey for Women) for Matilda, both hugely impressive places to this day. The Normandy Museum offers a panorama of the lives of the people who have occupied Normandy’s entire territory, from prehistory to the massive migrations during the Early Middle Ages and up to the transformations brought to the rural landscape by the industrial revolution. The museum offers a range of activities: guided tours, discovery trails, educational workshops, demonstrations and live performances.

Fast forward to the 20th century and this region of France continues to cement its place in history. It was here that a defining moment of allied combat during World War II changed the course of the war. The Battle of Normandy began on June 6, 1944, known around the world as D-Day, and had three phases: air landings centered on Utah Beach in the west and Sword Beach in the east; air and naval bombardments of the Atlantic Wall; and seaborne landings on beaches code-named Utah, Omaha, Gold, Juno and Sword. There are a number of sites, museums and memorials dedicated to the bravery of those who served and sacrificed, and every year on June 6 there are ceremonies and events to mark the occasion. Normandy has a significant and extensive place in history and visiting these sites should be part of any visit to the region.

No visit to France would be complete without exploring the culinary side of this culinary paradise. France is synonymous with exceptional food and wine, and Normandy has the distinction of producing excellent brandy and cider from their apple and pear crops. There are a number of farms that offer tours and tastings. Add a visit to an andouille sausage production site or a snail farm to sample the escargot and you’ve got the makings of a perfect summer picnic. Now that you know, you’ve got to go!