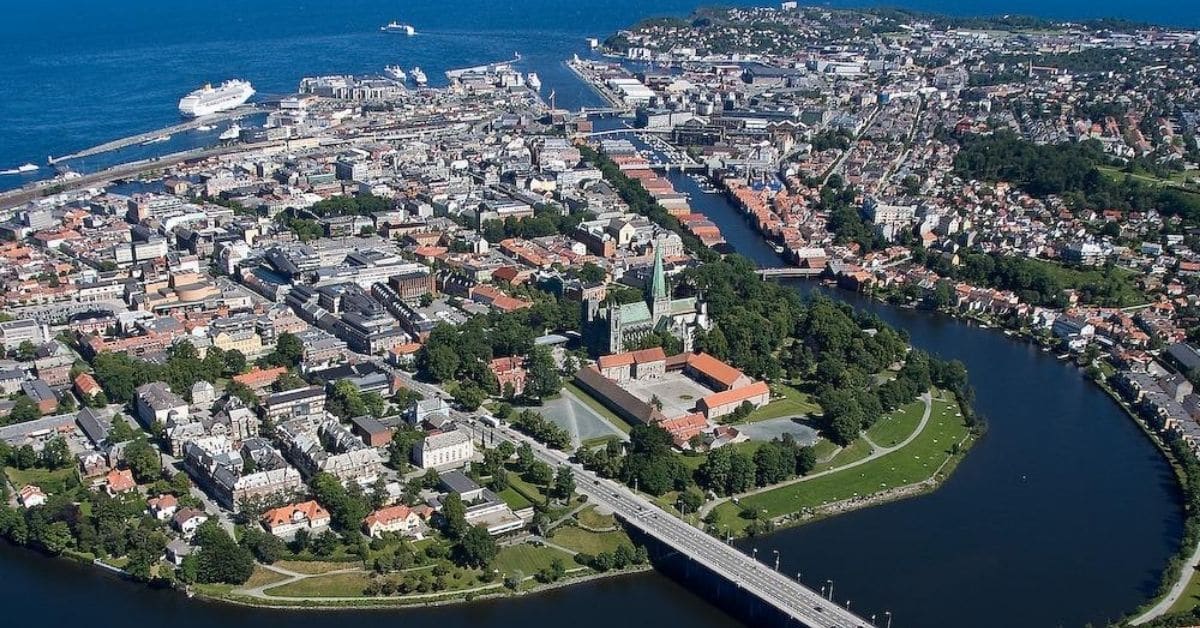 Founded by the Viking King Olav Tryggvason in 997 AD, Trondheim has a unique space in Norwegian culture. As the original capital of Norway and now the third-largest city in the country, culture and history swirl around this port to make it a unique destination. Trondheim is an ideal destination in Norway, offering a large variety of cultural activities that include sites on the official European Cultural Routes list. Today, the port sees hundreds of cruise calls per year where visitors to the terminal are greeted with locals in traditional costumes before they head out to explore the city.

Trondheim is well known for being a cultural and historical center in Norway. One of the oldest buildings in Trondheim is the Nidaros Cathedral, often used as a pilgrimage site. The Cathedral is the northernmost gothic cathedral in the world and began construction in 1070 AD over the gravesite of Saint Olav. However, there are older parts of the grounds from the 12th century. The Nidaros Cathedral is what placed Trondheim onto the official European Cultural Routes listing alongside Santiago de Compostela in Spain. Nearby, in the city center is the Kristiansten Fortress. This historical fortress was built originally in 1681 and was used to protect Norway from several invaders and threats during its time as an active military base. Today, the Kristiansten Fortress is open to visitors 24/7/365 and still houses several historical artifacts, most notably a series of historical canons that are still fully operational and used for official ceremonies today.

Trondheim’s culture can be explored in two ways. For a more historical perspective, the city has several museums for which they are famous. Among these are the Armoury Military Museum covering the military history of the area, the Sverresborg Folk Museum which has a collection of over 80 historical buildings and artifacts, and the Ringve National Museum of Music exhibiting historical and modern collections of instruments from all over the world. The most popular way to explore Trondheim’s culture is walking the city where visitors are greeted by a multitude of different attractions that each tell a unique cultural story. For example, Old Town Bakklandet, which is at the center of town, is known as the oldest part of the city center and boasts a charming atmosphere filled with food, music, and wonderful architecture. In Old Town Bakklandet, visitors can spend time at the Old Town Bridge and at Trampe, the world’s first bicycle lift. Getting around the city from Old Town Bakklandet and onwards is a unique experience all its own thanks to the Grakallbanen line on the tram. This line has been part of the public transportation system in Trondheim since 1924 and offers a ride around the city with 21 stations. It is even possible to book the tram for a tour in the original carriages from the 50’s. Trondheim offers great food tours, boat trips around the harbor, a chance to see Sea Eagles, or horseback riding in nearby Hitra.

Most would say the best time to visit Trondheim is at the end of July and into early August when the city celebrates the St. Olav Festival. While this is mostly a religious festival centered around celebrating Olav Haraldsson, who attempted to Christianize Norway, a multitude of activities such as concerts and plays take over the city for the celebration. The festival is the best way to fully experience the cultural heritage of Trondheim and leaves an indelible impression on every visitor.

With access for both river and sea cruises, it is easy to see why Trondheim makes an enticing destination for any cruise line. The dense cultural history and sheer number of attractions and activities will be sure to make any cruise guest thrilled with a call in the Port of Trondheim.